A Modern Fairy Tale...with a happy ending.
Once upon a time there was a woman who had a degree in early childhood development. She had years of experience teaching children, potty training children, birthing children and raising children. She and her amazingly patient husband were blessed with a 4th little boy. This little boy always seemed "different" from her other children and her friend's children. She was puzzled. She tried everything in her power to figure out what made this child tick, explode or find joy. He had numerous quirks about him that were affecting her whole family. He cried at every bath, grocery shopping trip, in cold weather, in loud noises, and was generally miserable throughout the day. He was angry, he bit people, he pulled hair, cried randomly, potty trained late, avoided eye contact and had many repetitive behaviors that worried his mother. Mealtimes were mini-nightmares, food was everywhere but in this child's mouth. She wondered, would he ever grow out of his highchair? His mother prayed, read books, sought out experts, asked friends, and endured months of what, why and how to deal with this?

Her best coping method was agoraphobia. It was much easier to never leave the house. That got old very quickly. Her husband was a skilled shopper, at least they had food. Going to church was a major effort. They always sat in the back row, in case they needed a quick exit. Getting babysitters became a rare event. Dates with her husband were reserved for really special times, like anniversaries.

After reading numerous books and eliminating autism, she finally found a name for this: Sensory Integration Disorder or Sensory Processing Disorder. The names have changed, but the symptoms are similar. This little boy's nervous system reacted differently to external stimuli. Cold, heat, pressure, noises, and transitions caused him to loose control of himself. Things sent him into fight or flight, which put him in danger daily. His worried mother learned to navigate the triggers that brought upon the 'melt downs'. She and her husband prayed. They were desperate. They were seeking out what was best for this child. Did he need expensive therapists? Did he need a special classroom? Did he need medication? Could we cast this out in prayer? One thing his mother did know, is she didn't want to fall for any false cure or 'snake oil'.

When the neurologist suggested further testing for the alphabet soup diagnosis that he suspected, she balked. The thought of her little 3 year-old in the hands of psychologists and therapists for a total of 9 hours, just didn't put her at ease. When her pediatrician recommended counseling, she lost faith in him. She couldn't grasp how any 3 year-old could be counseled not to have outbursts. She knew if she could talk a three year old into not behaving a certain way, she'd be on Oprah. She would be famous and sell millions of her books about how to make your three year-old obey every time.
She argued with insurance companies, and eventually realized: Just like when she took her older children's education in her own hands, she was on her own with this, too. After learning about the benefits of occupational therapy, she faithfully did activities from the books, The Out of Sync Child and The Out Of Sync Child Has Fun. She religiously gave him omega oils. She was rigid about sleep times and getting outside for fresh air. She enrolled him in a private preschool as not to isolate him from others. She never denied that there was something going on, yet she held him to a standard of behavior. She didn't use his 'issues' to excuse his numerous mischief exploits.

She bit her tongue when well meaning loved ones said, "He's just a boy." She knew boys, this was more than a boy issue. Admitting that your child has something wrong was scary and liberating for her. Naming the elephant in the room was the first step in getting it out. This elephant began controlling her life. Every decision, plan and move made was done in light of  "will this work around the elephant?" Her faith and determination were not enough. Something had to change.

With all of the efforts she was making, she still felt, she was going backwards. Why were some days great, while others made her want to curl up in a ball and cry? She started to have a vision for the future and it wasn't hopeful. At times, she found comfort in the word of God. 2 Timothy 1:7 was her promise. She had a little hope, but still some rough days.

She came across a homeschooling forum with a post discussing a diet called Feingold. Some posts strongly talked against it. Some couldn't say enough about it. She went to the website and began reading the first fifty pages of their book for free. Because she was too cheap to order the book, she found it at her local library.

It took some humbling for her to even check the book out; "Why Can't My Child Behave? by Jane Hersey. She was a Christian mom who believed in training her children in godly character. She was a failure in the first few years, no parenting tactics worked with this little one.  Nevertheless, she devoured this book about allergist Benjamin Feingold and his discovery of an allergy diet that helped children with other problems besides food issues.

Stay tuned for part two, the happy ending. This is the first of a series of posts as I share our experience with the Feingold diet.

I share some tips about starting the diet here.

***Disclaimers Galore***
Any similarities to people in this story are purely intentional. The identities have been changed to protect the guilty and the innocent alike. If you can relate to the nice lady in the story, I encourage you to visit www.feingold.org. There are testimonies of families who have been greatly helped by this diet. I am not being paid by the Feingold Association for this story. In fact, I lifted this image below from their website while hoping they won't mind. This post is not to be construed as medical advice, I am a nursing school dropout who reads books. I am not qualified to offer any medical advice, the only thing I have in common with  physicians is messy handwriting. 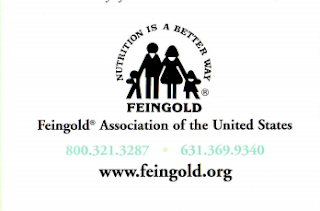 Oh, wow! That sounds A LOT like my son, and our experience with him. I could have written a lot of that. I'll be checking out your link!!

My daughter has sensory issues coupled with a few other things that we recently put a name to. I have been working on a diet revolution in my home for the past year. I have eliminated high fructose corn syrup, most sugar and am now tacking the food coloring additives. I have three books being shipped from amazon uk regarding the Feingold diet and specifically its success with adhd. I learned about Feingold through your blog and look forward to learning more about this diet for my children. Thank you again!

Thank you also for your comment on my blog. Yes, the journals were used for comments. The parents and children filled the books with positive, constructive and supportive comments. We had so much fun reading though them at home.

Of the books available at Amazon in the US, the Feingold Cookbook is over 30 years out of date; It's still a good cookbook, but don't depend on it for the diet information; the 1985 reprint of Dr. Feingold original book is also over 30 years out of date - it was reprinted, but not updated. The book by Jane Hersey is current. Buy it, read the first part for free on the website, or get it at your library, where many have been donated.

If you happen to find a Foodlist & Shopping Guide book for sale on Ebay or anywhere, it is not a bargain - it will be out of date and obsolete - it may contain items since removed. It is also only part of the materials provided by the Feingold Association. So -- get your information directly from the source, at http://www.feingold.org