Valentine's Day "The Birds and the Bees" homeschooling style

While my children are working independently, I often peek in on them. I do this because they can become distracted, easily. Sometimes just hearing my footsteps can awaken them from their daydreams and refocus their minds. I have to admit, I was exactly the same way. During my school days in public school, I found things to gaze at. Posters, windows, or the lint on the back of my classmates sweater fought for my attention. I focused on anything but the task at hand.

When Paperboy was nine, he was at his pinnacle of distractablity. One morning, as I walked by Paperboy, he was seriously gazing. I was about to begin my 'get focused' speech. He shushed me.

O.k. now I have heard many odd things as a homeschooling mom, but I have to admit, this was a first for me. He pointed to our the front window. Right outside in the bushes, there they were. I did what every normal homeschool Mama would do, I grabbed a camera. We tip-toed into the bushes, I was only able to get two shots of this amorous pair of snakes, before they slithered away. The funny thing is, Paperboy insisted it was three snakes. I tried to explain:


"It only looks like three because of how long the snakes are." 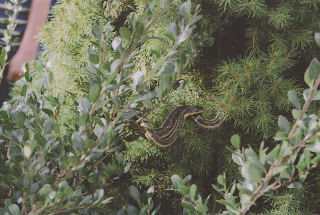 I thought of how silly this sounded. I was arguing snake monogamy with my nine year-old boy as we observed their little tryst. Oh my. This is where I should have called upon my husband, the amateur herpetologist. 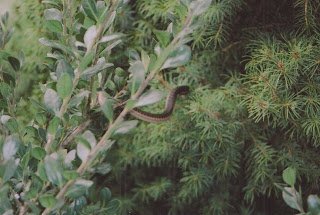 Ever since that day, whenever I pass the bushes in my front yard, I can't resist checking for snakes.

I welcome reader comments with open arms. I also understand if you aren't the commenting or hugging type of person, you can drop me an email at accidentallyhomeschooling@gmail.com.

How Fun! What a good mom you were to get pictures..

Cool...and my nine year old is SOO distractible right now! I am following you from the HHH!