This year has been a year of many changes. We have never been pet people, much to Random's disappointment. I remember one Christmas, I put the cutest stuffed puppy hanging out of Random's stocking. As I tucked him in that night, I realized he had a great faith. He told me his prayer. "Mom I prayed that God would bring my doggie to life." My heart broke. "Well son, if God brings that puppy to life, we'd have to keep him." I always had a good reason not to get a pet. But I was softening. Miss Kitty, in all of her orneriness had grown on us. Please honey, can we get a cat?

This Christmas Eve, Random ran in the house, "Here Kitty Kitty!" He had found the animal rescue leagues web site. "Don't be silly, Daddy won't let us get a cat." He could hope. He didn't know Daddy had showed up too late to start the adoption. Daddy bought the litter box, litter and a scoop. When Random opened it up the next morning, he knew we were committed. He and Daddy would pick up the kitten the shelter had promised would still be there. Just show up Monday morning and begin the paperwork.

The kitten had a brother. The new owner couldn't bear to separate them. Random's kitten was now on it's way to his new home. They could add him to the waiting list. He waited 15 years to get a pet, his parents finally agreed, only to be put on a waiting list.

Just as Random was leaving, they suggested he see the older cats. It was love at first sight. Rosco climbed into his lap.  It was fate. He had been in the shelter almost 2 months. His time was running out, we sprung him from jail. His previous owner moved into a condo that didn't allow cats. We are so fortunate! 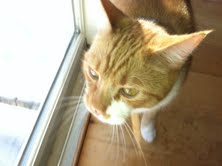 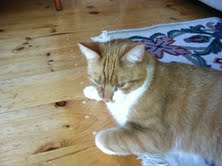 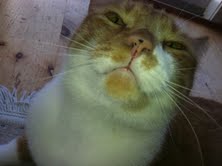