I'm joining with Chrysalis for Marriage Monday. It's not because I am an expert, or because I have a perfect one. It's because I am still working at it. I've written before about it, not the juicy details, but a few things I have learned. Today's topic is Christian commitment. The Gman and I have lasted 21 years, only by the grace of God, I wasn't one to stick with anything or anyone for more than a few weeks...until I made the major commitment. the most important commitment, the one to live for Christ. My vow to Christ is the backbone of my commitment to the Gman. 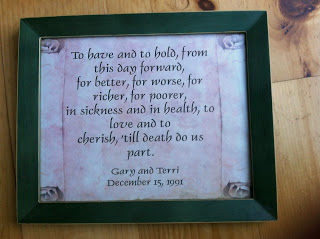 I used to be a quitter. When things got difficult, I resorted to flight, rather than fight. The work that Christ has done in my life, gives me the strength to stay and fight. Fight with my hubby and fight for my marriage. It took a meeting with a stranger last month to show me how blessed I am.

Just why are we here today?
I quickly dropped the kids and rushed to the meeting. This could be a good showing. Ten days before Christmas, looking at a house on the lake means one thing. This couple could be a serious buyers.

Ten days before Christmas, was the day I married the Gman. Twenty-one years ago.

No comments about the home. He noticed the photo of the older couple. He tried to joke with me and tell me why the man passed away first........... So he could have some peace.

"It's my anniversary" I told him.

His face dropped in awe.

He is a divorce attorney. In his words, he has seen all of the #*%^^ and excuses.

He got back to my marriage.

How many kids? Four

Are you happily married? Yes (the truth for that day)

He called me a rare breed. We discussed society, tragedy, commitment, and kids. Apparently the school shooter was devastated by his parent's divorce. His wife chimed in. They had 15 years under their belt. Their one child was putting them through the ringer.

He hugged me and told me I made his day.

After about a half hour showing, they never even commented on the home.

Great witness!! I actually just posted minutes ago about marriage- we are celebrating our 32nd this week. It is a hard fought feat, but one I am so glad that we fought for! Congratulations on your 21st!!!

Found you via Rachael Colby! Love your Blog!